It Lasts For An Eternity – The History of the Wedding Ring 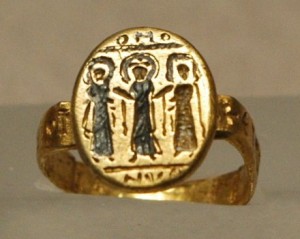 Maliere takes a look at the history of the wedding ring and asks why it doesn’t get as much attention as an engagement ring.

Most of the time when it comes to the whole business of marriage, it’s the sparkling flash of the engagement ring that gets most of the attention from friends and families. The excitement that surrounds a proposal is very palpable. The result of this is that the engagement ring’s sober older sister, the wedding ring, often gets overlooked. She is seen as an inevitable accessory that will sit under her shining sister’s bejeweled dress after all ceremonies have come to a close. There is almost an almost business-like attitude towardzs the simplicity of a clean, unadorned circle. And yet the engagement ring represents an intention; the wedding ring represents that intention being acted out, every single day that two people are married. Promises can be quite fantastical and romantic, but surely it’s the routine, even sometimes tedious, application of that promise that counts more?

The first documented exchange of wedding rings occurred in Ancient Egypt about 4800 years ago. Then, a wedding ring had a supernatural aspect to it, as if the ring was a living magical organism that linked two souls in a mirrored after-life. The Romans being the Romans made it a bit more calculated than that. For them, it represented a legal agreement between the father of the bride and the groom – exchanging the bride as a piece of property. Of course this carried over into medieval times and still carries in some cultures especially in the Middle East. However, the Romans often favoured iron for their wedding rings as it represented strength. But they forgot that iron rusts, so perhaps we shouldn’t follow their example for a long, happy marriage!

Oddly enough, men’s wedding rings only really became widespread in the Western World in the Twentieth Century. Some speculate this could be to do with the ring representing a sort of ‘branding’ of the wife as property of the husband before this. However the worst of wars, World War II, seemed to remind many men of what was important; not gaining tracts of soil through combat, but the love of their wives and the life they had built or had begun to build together. The circle of eternity may be a terrifying even tedious prospect, but it also can be the source of the highest of hopes – something which perhaps we should take into consideration more when approaching the Big Day.

Do you think wedding rings often get overlooked because engagement rings are more eye-catching? Do you think more time and thought should be put into buying a wedding ring? Tell us your thoughts in the comments below or chat to us on Facebook or Twitter.

« What is The Olympic Gold Medal Made of?